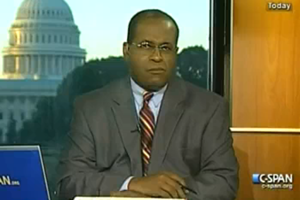 At least he must be happy she specifically wanted to talk to him. A 90-year-old C-SPAN viewer requested specifically to ask the “colored man” anchoring Washington Journal why it is “coloreds” are still angry about this whole “slavery” thing. When told the conversation topic on the program today was actually Wall Street, she felt it was important to clarify: “I’m not a racist.”

“I am 90 years old and I just wanted to ask the colored man, why don’t colored people, instead of saying what we did to them, why dont they say what we did for them? They talk about the slavery, but since then they have given them welfare, free medicine, free everything.”

The anchor very deftly deflected the criticism while managing to keep a straight face (almost): “Ma’am, I think this is more of a conversation about the relationship between the administration and people on Wall Street, and not one that is necessarily based on race.” She responds, “Okay. I’m not a racist. That was my comment, thank you.”

Given the demographic these daytime C-SPAN talk shows seem to attract, and the fact that is feels like every four months one of these confused non-racists manages to get through to phone lines (remember “Black-SPAN“?), one has to wonder how many years of “dealing with old racist callers” workshops the anchors have to go through before being put on air. The hilarious, if sad, clip below: