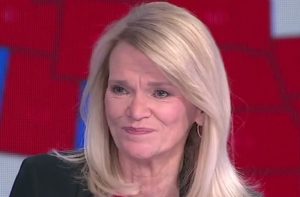 ABC News’ Martha Raddatz began to choke up during the network’s 2016 Election Night coverage when discussing the ramifications a President Donald Trump might have on the military.

Raddatz, one of the 2016 debate moderators, sounded shaky from the get-go. “Donald Trump, I questioned what he would do about Syria and his understanding of military policy and civilian/military divide, I don’t know that he really has a plan for what he’s going to do there,” she said.

“I was also looking back at an interview [Democratic vice presidential candidate] Tim Kaine gave,” she continued. “Tim Kaine has a son in the Marine Corps. He was asked by CBS’s John Dickerson, ‘If Donald Trump is democratically elected,and your son is serving as a Marine, you wouldn’t trust his life under that commander-in-chief?’ And Kaine said, ‘I wouldn’t.’”

“That’s a pretty extreme thing to say; if you have a son in the Marine Corps, and that you don’t trust the commander-in-chief” Raddatz said, her voice breaking. “The people in the military defend the Constitution. That’s what they do.”

Watch above, via ABC News.

>>Follow Alex Griswold (@HashtagGriswold) on Twitter
— —
UPDATE – 11/09/16: This post has been edited since it was originally posted. The headline has been changed to better reflect Martha Raddatz’s reaction.  An ABC News spokesperson also responded to the article by saying that it was “ridiculous and untrue.” In fairness to Raddatz, at the time of this report, she had been on air for nearly 7 hours live reporting about the election.