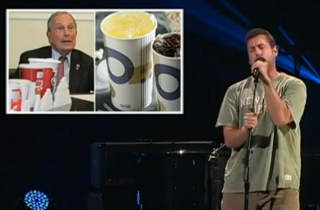 During a special cameo appearance at the 12-12-12 Concert for Sandy Relief, comedian Adam Sandler paid tribute to the resilience of the NY/NJ metropolitan residents affected by Hurricane Sandy.

Name-dropping every famous New Yorker under the sun from Mayor Michael Bloomberg to Alex Rodriguez to Donald Trump‘s combover, the lyrics were as follows:

“The terror of the hurricane / The unforgiving wind and rain / New York, the world held its breath as the storm took it to you / But you’ve been knocked down in the past / Taking shots they thought would last / But you always get right up shouting ‘Hallelujah!’ / Hallelujah / Sandy, screw ya / We’ll get through ya / ‘Cause we’re New Yorkers.

“‘Cause we believe this too shall pass / Like when Sanchez fumbled into an ass / During the playoffs, A-Rod telling girls in the crowd ‘I wanna do ya’ / The Mets have sucked since ’86 / Isaiah tried to ruin the Knicks / But now Jason Kidd and the boys can freakin’ school ya / Hallelujah / Sandy, screw ya / We’ll get through ya / ‘Cause we’re New Yorkers.

“The bed bug scare of 2010 / The Lohans getting busted again and again / The lady who said she was a man right after she blew ya (sorry that was just me!) / Trump’s combover always making us sick/ The congressmen who tweeted his dick / The mayor’s ban on 32-ounce Mountain Dew-ya / Hallelujah / Sandy, screw ya / We’ll get through ya / ‘Cause we’re New Yorkers.

“And Jersey, you’ve taken your share of hits / The Situation always showing his tits / And Turnpike exit 13 stinkin’ like poo-ya / You lost the Nets and now they’re good / But we’re still the Hudson brotherhood / Together we’ll give Sandy a big ‘fungool’-ya / Hallelujah / Connecticut too-ya! / We’ll get through ya! / ‘Cause we’re New Yorkers!”

Watch the performance below, via Bloomberg: