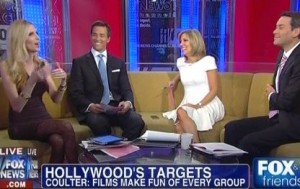 Perhaps there is no more appropriate time to talk about the media and Hollywood elite than on the day of the White House Correspondents Dinner. Ann Coulter was on hand along with the Fox & Friends hosts today to talk about how the Hollywood elite loves to mock average Americans, particularly Southerners, even though they’ve never actually taken the time out to meet them.

Coulter said Hollywood often exploits stereotypes of “Southerners, residents of small towns, Christians, priests, businesses, the rich,” and other groups for movies and TV shows. She mocked the Law & Order TV franchise for suggesting New York has some kind of white supremacist problem. When asked by one of the hosts if it’s okay because they mock everyone, Coulter said Hollywood is willing to mock everything except for liberal ideas, like having an environmentalist as the bad guy instead of the stereotypical evil oil businessman or something.

She even pointed to Footloose as an example of a film that mocks small town ideas, because of its implications that many small towns hate dancing and have super-Christian legislators that expressly prohibit it. She also claimed that in the vast majority of Hollywood films, a cross only appears on-screen in a negative context, and she recalled something someone in Hollywood once told her that when designing sets for teenagers’ rooms, there’s always a Che Guevara poster or something to hang up.