Ann Coulter: If GOP Caves On Immigration, ‘No Republican Is Ever Going To Win Another National Election’ 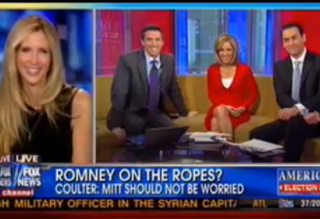 Returning to TV the day after both she and her preferred presidential candidate took the stage at CPAC, Ann Coulter stopped by Fox & Friends this morning to discuss the recent Rick Santorum mini-surge and her conviction that Mitt Romney must be the next president. She also fended off the now-usual criticism of Romney as a moderate by pointing out his stances on immigration and why being tough with illegal immigrants was of vital importance: “if we lose on that issue, the entire country will become California and no Republican will ever win an national election.”

The Fox & Friends team began by asking about last week’s much talked about Santorum surge, which Coulter did not believe was much of a big deal. “It’s played more in the media than it’s worth,” she replied, adding later that the caucuses “weren’t really worth much” and that as far as numbers go, Romney was accelerating by double digits of delegates while Santorum didn’t get any out of some of the states he has won. “The media wants it to be a horse race,” she added, when it really was not much of one. Coulter also noted that, in hindsight, many races that felt competitive at the time were not such at all. “Once you have full hindsight… it seems sort of obvious now that Reagan was going to win the nomination in 1980,” she noted. What that means for today’s race, to Coulter, is that “clearly the momentum is with Mitt Romney, and I don’t think national polls mean much because people will say anything when their primary is three months away.”

Host Alisyn Camerota then asked about Romney’s speech yesterday at CPAC, and wondered whether Romney’s repeated use of the word “conservative” (29 times!) in his speech was a sign that “he doth protest too much.” “The poor guy can’t win!” replied Coulter, adding that he was the most conservative on the issues most important to her, particularly immigration. “Republicans are chomping at the bit to grant illegals amnesty, not because they have some love for Hispanics, but because they have a love of big business,” she told the hosts, adding that the issue was so crucial because “if we lose on that issue, the entire country will become California and no Republican is ever going to win a national election.”