Bashir: ‘IRS’ Is The New N-Word In The ‘War Against The Black Man In The White House’
video

Bashir: ‘IRS’ Is The New N-Word In The ‘War Against The Black Man In The White House’ 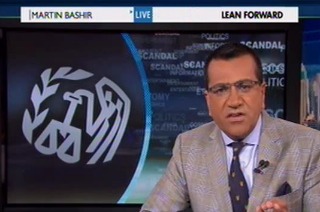 On Wednesday, MSNBC host Martin Bashir accused President Barack Obama’s critics, who are focusing on the scandal involving the Internal Revenue Service’s targeting of conservative groups, of using the IRS scandal in place of attacks on the president’s race.

Bashir scolded a variety of Republican commentators who he said “laid the groundwork” for Mitt Romney to make a “racist comment” in 2012 when he joked that no one ever needed to ask for his birth certificate.

“And now, the IRS is being used in exactly the same way as they tried to use the president’s birth certificate,” Bashir said. “For Republicans like Darrell Issa, who knows something about arson, those three letters now stand for something inflammatory.”

“Republicans are using it as their latest weapon in the war against the black man in the White House,” he insisted.

Bashir then referenced a portion of an interview by the late Republican political consultant Lee Atwater from 1981:

“So, this afternoon, we welcome the latest phrase in the lexicon of Republican attacks on this president – the IRS,” Bashir said. “Three letters that sound so innocent, but we know what you mean.”