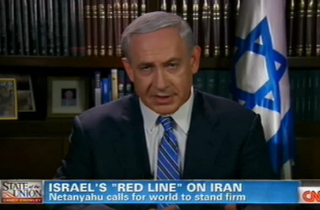 Appearing on CNN’s State of the Union with Candy Crowley, Israeli Prime Minister Benjamin Netanyahu urged the United States to join Israel in drawing a “red line” for Iran’s nuclear ambitions. He also likened the Iranian nuclear intentions to Oklahoma City bomber Timothy McVeigh walking into a gardening store and asking for feritilizer.

“I think it’s important to place a red line before Iran,” he told Crowley, “and I think that actually reduces the chance of military conflict because if they know there’s a stage in the enrichment or other nuclear that they cannot cross because they’ll face consequences, I think they’ll actually not cross it.”

He then lamented the fact that such a ‘red line’ did not exist in previous mid-east conflicts: “There wasn’t such a red line before Saddam Hussein, before the Gulf War when he invaded Kuwait. Maybe that could have been avoided, and I think Iran, too, has received some clear red lines on a number of issues, and they have backed off them.”

When asked about President Barack Obama‘s stance on dealing with Iran, Netanyahu confirmed his belief that the president will join in drawing such red lines. He also added that his intelligence knows that Iran is close to developing a weapon from enriched uranium: “In the six, seven months they will have got the bomb material, and I think that we should count on the things that we do know in setting the red line.”

Crowley then challenged Netanyahu by saying that “Iran is allowing international agreements to go ahead and do what it’s doing because there are legitimate peaceful purposes for enriching this uranium.”

The Israeli PM disagreed. “Do you think so? You think so, Candy?” he asked.

“This is a country that denies the Holocaust, promises to wipe out Israel and is engaging terror throughout the world,” he continued, “and it’s like Timothy McVeigh walking into a shop in Oklahoma City and saying ‘I’d like to tend my garden, I would like to buy some fertilizer.’ ‘How much do you want?’ ‘I don’t know. 20,000 pounds.'”

“Come on. We know that they’re working towards the weapons,” he said. “We know that. It’s not something that we surmise. We have facts and data.”

Netanyahu then denied any political motivation for his hard talk on Iran: “I know that people, Candy, are trying to draw me into the American election, and I’m not going to do that. I will say that we value, we cherish bipartisan support for Israel in the United States, and we’re supported by Democrats and Republicans alike. This is not an electoral issue.”

“I think there’s a common interest of all Americans over all political persuasions to stop Iran,” he concluded.