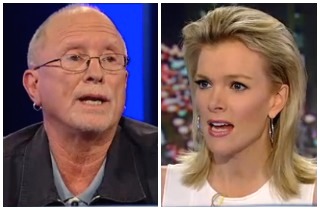 Former U.S. domestic terrorist Bill Ayers doesn’t think his uncomfortably tense summer interview on Fox News was “a big deal,” but he does have strong feelings about the person who conducted it.

In a separate interview with Salon, Bill Ayers says he didn’t know who Fox News anchor Megyn Kelly was before his back-and-forth with her back in July. She did, however, leave an impression.

“I had never even seen Megyn Kelly. She struck me as a very strange person,” Ayers told Salon. “She’s like a cyborg constructed in the basement of Fox News. She’s very striking, but very metallic, very cold. Her eyes are very cold.”

His full, sometimes puzzling thoughts regarding the interview:

So many people have approached me about that interview, and have had different reactions to it, but I don’t look at something like that as a big deal. I write a lot, and I’m still a very politically engaged and active person. I had never even seen Megyn Kelly. She struck me as a very strange person. She’s like a cyborg constructed in the basement of Fox News. She’s very striking, but very metallic, very cold. Her eyes are very cold.

We are in a culture where spectacle is more important than substance, and celebrity is more important than accomplishment. This is a danger. The ongoing, continuous circus does take a toll on our ability to think clearly. So, when we should be talking about issues of war and peace, economic choice and ecological destruction, we get drawn into the latest scandal, or the newest nude photos, and those things are all a distraction.

If you look at the two great dystopic novels of the 20th century, “1984″ and “Brave New World,” they were both right. So, we have big brother and the surveillance state, but we also have sex, and entertainment, and Soma. There’s that great moment in “Brave New World” when the narrator says to his date, “Don’t you want to be free?” She says, “I am free.” Then he says, “Don’t you want to break out of this?” And she says, “Break out to do what? I’m free do all of these wonderful, entertaining things.” So, on the one hand you have the circus, and on the other hand you have the nightstick and the torture cell. We have both.

It is a big problem, but it isn’t totalizing. There is a chance people can break free, but it’s tough.