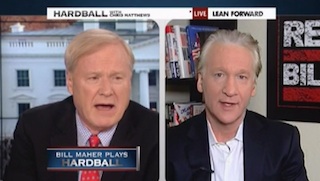 If anyone didn’t get enough back-patting from the Oscars last night, there was plenty for them to catch when Bill Maher appeared on Hardball just now. Chris Matthews enthused that Maher was the “funniest, smartest guy in the room” and Maher talked about how all smart people watch Hardball every day. Yay for friends! Anyway, amidst the meeting of the mutual admiration society, there was also talk of Maher’s million dollar donation to President Obama’s Super PAC and why he thinks it’s necessary.

Maher explained that the game had changed since 2008. While Obama was able to bring in massive amounts of small donations then, the fact that corporate entities and billionaires can now give amounts upwards of many, many millions of dollars will completely alter the situation. When Matthews jokingly asked him if he would be watching the Super PAC to see what percentage would be from him, Maher responded that, whatever it would be, it probably wouldn’t be enough.

“I was trying to throw a snowball to create an avalanche here to let the liberals who do think that this is already in the bag – probably because, like me, they watch Hardball every night and they see what idiots these Republicans are – but that’s not how the whole country sees it. And, I promise you, when it comes to election night, it’s going to be neck and neck. It’s going to be a very tight race.”

The HBO host pointed out that half the country was still fighting against a fictional President; a Muslim Socialist who cut defense and coddled terrorists. Matthews asked how he, with such a liberal audience, connected with people with those beliefs. Maher said that, while he didn’t want to connect with them, being on the road all the time enabled him too. Besides, he laughed, he got to talk to Tim Tebow at the Vanity Fair Oscars after party.

Oh, man, to be a fly on the wall during that conversation. Even if it wasn’t interesting, as a fly, you could get drunk totally easy at the open bar. Ah, that would be the life.

Anyway, Maher also took shots at the “idiots” running against Obama, joking that, with all the material Rick Santorum’s given him
, he should have written him the check.