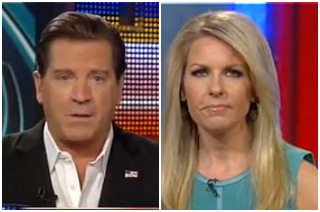 Fox host Eric Bolling led a debate over an ad on the side of some Seattle buses blaring fifteen mugshots of the FBI’s Most Wanted Terrorist list. The problem with the list: everybody on it is Muslim, which has led Illinois Congressman Jim McDermott to ask the FBI to take the ads down.

“I agree that the FBI should have everything in its power to capture terrorists, including this bus ad,” former Democratic staffer Mark Hannah said. “We have 3.5 million Arab Americans living in this country who are mostly law-abiding, god-fearing, freedom-loving.”

“You know what’s offensive?” Crowley continued. “What’s offensive is Muslim terrorists is killing thousands of us on 9/11, so many other terrorist attacks. You what’s offensive? Jim McDermott, going on and saying that somehow we should restrict the ability of intelligence agencies and law enforcement to go and apprehend these people by making their faces known. That’s what’s offensive.”

“I will defend to the end the FBI’s ability to effectively capture terrorists,” Hannah responded. “What the congressman is doing is asking them to reconsider the effectiveness of this.”

“If there were a bunch of Buddhist or Hindus or Roman Catholics carrying out grotesque acts of international terror, I would expect to see their faces on the side of bus,” Crowley said. “But no, we have Islamic terrorists—”

Crowley rolled right over him. “This kind of engagement in political correctness is actually hampering our ability to carry out this war and actually win it,” she said. “When this congressman talks about how it violates somehow Muslim sensitivity, why is the burden on the United States and on us always to extend ourselves in sensitivity to them. The burden should be on the Muslim world to show some sensitivity to us…Members of their community keep killing us.”

“And what’s the best way to do that?” Hannah said. “Is it to try to alienate people by saying we’re going to capture and kill people for $25 million on the side of the bus?”