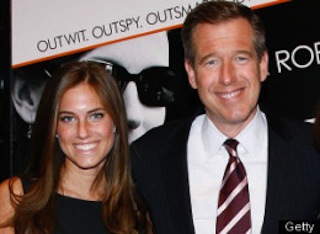 Last Sunday on HBO’s Girls (The show which everyone needs to debate! Needs to!), the character Marnie was having sex with her long-term boyfriend Charlie, who she’s grown to despise but is unable to break up with. Not even wanting to look at him, the bored Marnie tells Charlie to flip her over and have sex with her from behind, pretending that he misheard her every previous time she’d said she didn’t like that. He complies and, while Marnie stares off into space bored, Charlie happily exclaims how good it all feels. As you can tell, it was a pretty uncomfortable scene. Not, however, for the father of the actress playing Marnie; Brian Williams.

Vulture caught up with Williams at the Time 100 gala on Tuesday night and asked about his daughter, Allison’s performance. Williams played the proud papa, even when Vulture’s Jada Yuan quizzed him on some of the more adult content on the show.

What is it like watching Girls for you? Are you covering your eyes?
No, no. It’s kvelling, pride. It’s incredibly great. Her co-creator and I have known always that she was going to be an actress. So it’s fantastic.

I thought I read that she has to cover your eyes.
That was something someone made up in an article. There has not been a journalist with us in a room watching, that I know of. Other than myself. So no. Unmitigated joy.

I guess the transcript of that conversation couldn’t include the constant screaming going on in Williams’ head.

Oh well. He’s a good dad and his daughter’s getting her big break. And, worst case scenario, he can always just wash his mind by watching this video of a modestly dressed Allison singing the Mad Men theme over and over again.