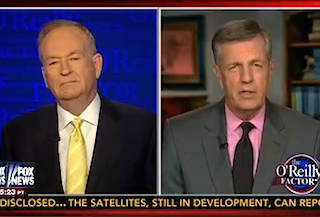 Bill O’Reilly invited Fox News contributor Brit Hume onto The O’Reilly Factor Monday night to expand on comments he made about Attorney General Eric Holder and race over the weekend. Hume said the reaction to his comments about Holder and President Barack Obama “benefitting enormously” because of their race was equal parts positive and negative, with about half of people on Twitter calling him “racist” because there were no African-Americans present for the debate on Fox News Sunday.

“In other words, in order to discuss this, you have to have an African-American present,” Hume added. “But if you’re just white, then discussing this is racist.”

O’Reilly went on to agree with Hume’s basic premise, arguing that if Obama had been white, then Hillary Clinton would have defeated him in 2008. Similarly, Hume described Obama as and “appealing person who seemed to be non-divisive, not a race hustler in any way” and therefore Americans “were proud of him, proud to see him elected” and has received “perhaps more than he would were he a white man, the benefit of the doubt from a great many people.”

Hume lamented that “being called a racist or labeled a racist, particularly if it’s successful, is one of the worst things that can happen to you in America.”