CBS Sports’ James Brown Speaks Out on Domestic Violence: ‘Our Silence Is Deafening and Deadly’ 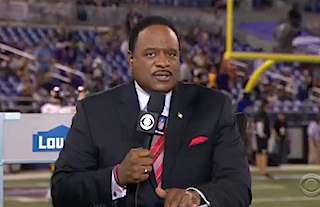 In a way that nobody at CBS Sports or the NFL could have anticipated, the Ray Rice domestic violence scandal dominated tonight’s pre-game show as the Rice’s Baltimore Ravens prepared to face off against the Pittsburgh Steelers. A show that was going to feature a video performance by Rihanna and other innocuous speculation about the football game about to be played turned into a live news report that felt more like 60 Minutes than Thursday Night Football.

CBS Evening News anchor Scott Pelley delivered a live update on the situation, which included repeated airing of the elevator surveillance video in which Rice can be seen knocking out his then-fiancée, despite some other networks’ decisions to stop showing it. Norah O’Donnell, who conducted a tough interview with NFL Commissioner Roger Goodell on CBS This Morning earlier this week, appeared to give her take on the league’s culpability. And Baltimore Ravens owner Steve Bisciotti was interviewed as well.

But perhaps the most powerful moment of the unusual NFL pre-show came towards the end of the half-hour when CBS anchor James Brown took some time to look straight in the camera and deliver a challenge to NFL players, owners, executives and fans when it comes to their treatment of women.

“Two years ago I challenged the NFL community and all men to seriously confront the problem of domestic violence, especially coming on the heels of the murder-suicide of Kansas City Chiefs football player Jovan Belcher and his girlfriend Kasandra Perkins. Yet, here we are again dealing with the same issue of violence against women.

Now let’s be clear, this problem is bigger than football. There has been, appropriately so, intense and widespread outrage following the release of the video showing what happened inside the elevator at the casino. But wouldn’t it be productive if this collective outrage, as my colleagues have said, could be channelled to truly hear and address the long-suffering cries for help by so many women? And as they said, do something about it? Like an on-going education of men about what healthy, respectful manhood is all about.

And it starts with how we view women. Our language is important. For instance, when a guy says, ‘you throw the ball like a girl’ or ‘you’re a little sissy,’ it reflects an attitude that devalues women and attitudes will eventually manifest in some fashion. Women have been at the forefront in the domestic violence awareness and prevention arena. And whether Janay Rice considers herself a victim or not, millions of women in this country are.

Consider this: According to domestic violence experts, more than three women per day lose their lives at the hands of their partners. That means that since the night February 15th in Atlantic City [when the elevator incident occurred] more than 600 women have died.

So this is yet another call to men to stand up and take responsibility for their thoughts, their words, their deeds and as Deion [Sanders] says to give help or to get help, because our silence is deafening and deadly.”