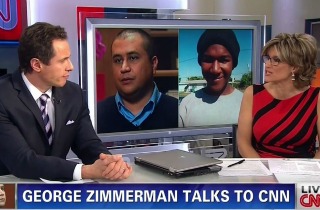 CNN anchor Chris Cuomo joined his colleague Ashleigh Banfield on Monday to share his thoughts on his interview with George Zimmerman. Cuomo said he believed that Zimmerman has been lent more “power” from the press and the public than he deserves. The CNN host asserted that he believes Zimmerman is really just an “unsophisticated guy.”

Banfield began by confessing that she was unsure whether Zimmerman was telling the truth when he said he was unaware of the details of the case against Michael Dunn, a Florida man who was convicted of attempted murder for his role in the shooting death of Jordan Davis.

Cuomo said that he believed Zimmerman’s denials. “I put that in the piece because I thought it was a window into who we’re actually dealing with,” Cuomo said. “George Zimmerman has been given a lot of power by people; that he’s a sophisticated guy who knew how to manipulate the system, and knew the law, and knew he could get away with killing if he did it a certain way.”

“I think he is something significantly and substantially less than that,” Cuomo continued. “I think that he is an unsophisticated guy and he is an example of what happens when you have a low standard for self-defense.”

“He is so secure in the notion that he was a victim,” Cuomo later said, “that it is difficult for him – again, it goes to sophistication – to distinguish himself being a victim and Trayvon Martin being a victim.”