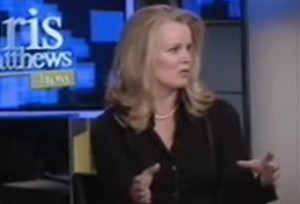 BBC World News anchor Katty Kay got off a cheeky one-liner that had her fellow Chris Matthews Show panelists chuckling (and in Kathleen Parker‘s case, perhaps blushing) when she assessed Florida’s importance in electoral politics by saying “It’s very big, and it swings.”

That’s probably true, but it’s fair to ask what good that does, given the state’s history of electile dysfunction.

Host Chris Matthews began by asking “This week’s Big Question: what’s the biggest reason Florida’s the most important political state in the union? Is it its bigness? Or is it its diversity? Or is it simply exciting? Or is that nobody knows, and neither party can count on it, and that it’s always been the decider? What makes it so hot?”

Time’s Michael Duffy thought it was the state’s large number of electoral votes, and declared, “Obama cannot win it.”

Then, it was Kay’s turn. “I think it’s one and four put together. It’s very big and it swings,” she said, to laughter from the panel.

“I have to take a minute and recover,” said a laughing Parker (that’s what she said).

“I knew that Kathleen would like that,” laughed Kay.

Parker composed herself, and compared Florida to a Petri dish. “North Florida is Georgia, the middle is the Midwest, and the bottom is…another country.”

The Daily Beast‘s Andrew Sullivan called back to Kay’s response, saying “Diversity. It’s all of America in one big swinging state.”

Other states’ residents, like California, which is long and full of seamen, might find Kay’s assessment hard to swallow. Give us your best state-based double entendres in the comments section.

Here’s the clip, from The Chris Matthews Show: