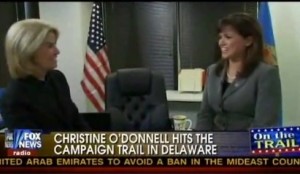 Senate candidate Christine O’Donnell followed up her national media silence-breaking interview with CNN by going On the Record with Greta Van Susteren last night. Eschewing the hunt for a big sound-bite, Van Susteren wisely employed a non-confrontational style that let the subject, and subject matter, speak for themselves. This is especially effective with the media gun-shy O’Donnell, who’s more likely to clam up under even mild cross-examination. In part one of the interview, she quizzed O’Donnell on a variety of foreign policy issues, and the result was revealing in ways that other O’Donnell interviews have not been.

In the nearly 10-minute interview, Greta asked O’Donnell how she would handle a variety of foreign policy issues, and every one of the responses involved “strengthening” something, but O’Donnell never gets around to explaining how to achieve the enstrengthening. It’s obviously not through additional spending, and she’s already ruled out magic, which seems to leave us no choice but to extract the extra strength from bottles of Tylenol.

O’Donnell’s detractors will no doubt get a chuckle when O’Donnell admits to not having access to classified information, for a change, and perhaps shudder at the notion that she soon might.

On the positive side for O’Donnell, she not only avoids making any “I can see Russia from my house” gaffes, she even comes off as decently-versed. While her responses are simplistic, O’Donnell includes enough detail to show that she’s at least aware of what’s going on. She’s also a great deal less strident on foreign policy than many conservatives, particularly regarding the Obama administration and Israel. As usual, her likeable persona shines through it all.

The overall effect is probably a net positive for O’Donnell, empty but delicious calories for her audience. This makes her choice to grant the interview on a Friday most unfortunate, dropping it into the dead weekend news cycle.