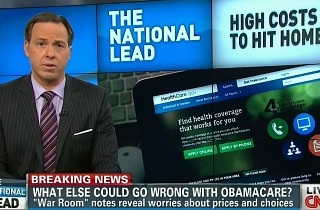 According to a memo obtained by CNN, the White House office charged with implementing the Affordable Care Act expressed concerns last week about the media’s focus after the insurance exchanges website was finally fixed. In the October 28 memo, administration officials warned that the press would focus on the limited access some consumers will have to new insurance plans and the high cost of some plans.

“CNN has obtained notes from one week ago from the Obama administration’s self-labeled war room where administration officials focus on implementing the law,” CNN host Jake Tapper revealed. “And their concern is that once the HealthCare.Gov website glitches are worked out, some consumers will go online and be disappointed with high prices and limited choice.”

RELATED: GOP’s Blackburn During Obamacare Hearing: ‘Some Like to Drink Out of a Red Solo Cup…’

“[T]he media attention will follow individuals to plan selection and their ultimate choices,” the memo read. “And, in some cases there will be fewer options than would be desired to promote consumer choice and an ideal shopping experience.”

“Additionally, in some cases there will be relatively high cost plans,” the memo continued.

The memo was apparently drafted in response to a story in the New York Times which reported that the ACA’s insurance exchanges have underserved some rural areas. “Of the roughly 2,500 counties served by the federal exchanges, more than half, or 58%, have plans offered by just one or two insurance carriers,” the story read. “In about 530 counties, only a single insurer is participating.”