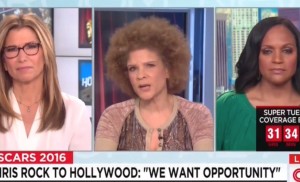 Between Chris Rock‘s blistering opening monologue and his final triumphant shout of “Black Lives Matter,” Sunday night’s Oscar telecast was studded with commentary — some wickedly satirical, some soberly earnest — about diversity in Hollywood and race in America, prompting CNN’s Carol Costello to describe the experience of watching the show thusly: “Please stop and let me enjoy this for a moment.”

Guest commentator Michaela Angela David agreed, offering that a more appropriate hashtag to describe Rock’s confrontational comedy might have been “#OscarsSoAwkward,” not only to describe the discomfort of anyone called out in the audience but for black moviegoers and culture watchers who, she said, had to choose between watching the awards or watching “Hollywood’s biggest stars” fundraise for Flint on a concurrent telecast. The black presenters during the show, she said, seemed “extra-tokened” as if “they were wheeling black people out for gratuitous things.” The material made people “uncomfortable,” and “some of it went too far and some of it didn’t go far enough — it was weird,” she said.

Costello agreed, adding: “It went on the entire night. They had sketches. And after a while, it was like, ‘Please stop and let me enjoy this for a moment.'”