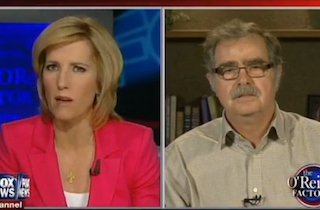 St. Louis Post-Dispatch columnist Bill McClellan paid a visit to The O’Reilly Factor on Thursday night to discuss his recent column in which he argued military funeral honors should be done away with, given that “most veterans did nothing heroic.” This didn’t jive well with fill-in host Laura Ingraham, who pressed him on his arguments.

“But what about the guy who spends a couple of years in the military and then gets on with his life? Bear in mind that most veterans did nothing heroic. They served, and that’s laudable, but it hardly seems necessary to provide them all with military honors after they have died. In fact, it seems generous enough to provide veterans and their spouses with free space and headstones at a national cemetery.”

Ingraham pointed to the money Planned Parenthood receives (and money to study snail sex) — which would be more appropriate places to cut spending than military honors. McClellan said he’d cut “a bunch of stuff” if he could, pointing to the live bugler as one example of something they’ve nixed. Veterans organizations, he said, can provide honors.

Clearly not buying the columnist’s line of reasoning, Ingraham told him that he knew his piece would be “inflammatory” — and questioned whether that’s the most pressing issue he could pick to write about. His topics of choice, McClellan argued, don’t attempt to handpick pressing matters.

Ingraham questioning further, asking why he went as far as saying most veterans weren’t heroic, a point that McClellan, a veteran, stood by, saying he served “unheroically.” The Family Research Council’s Bob McGinnis, as well as Ingraham, vehemently disagree with this point, asserting that everyone who’s served in the military is making a great sacrifice regardless of the role they served — and that is heroic.

The remainder of the segment consisted of more disagreement, with neither side budging. Such a column being provocative, though, is far from surprising.