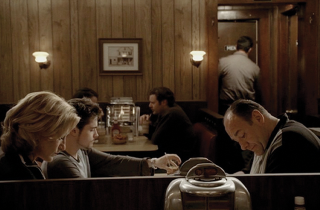 Eight years after HBO’s The Sopranos ended on a stunningly ambiguous note, creator David Chase gave a shot-by-shot explanation of the final scene that left many viewers scratching their heads.

For those who don’t recall: The show ended in 2007 with an abrupt cut to black, with Tony and Carmela Soprano seated at a diner with their two children. Journey‘s 1981 hit “Don’t Stop Believin'” played in the background up until the final moment. In the seconds leading up to the end, Tony catches the eye of a strange man who fidgets with his coffee at the counter and eventually heads to the bathroom.

The sudden ending explained nothing. A national conversation began over whether Tony was or was not slain by that man. What did it all mean? What was the purpose of building up tension to end on nothingness?

In an interview with the Directors Guild of America, Chase broke down each shot, explaining his thinking behind the directorial vision. What he did not provide, however, was a clear answer as to what happens to the Soprano family.

“When it’s over,” Chase said of the infamous scene, “I think you’re probably always blindsided by it. That’s all I can say.”

Explaining the song selection, Chase said it was for dramatic tension and also for a deeper purpose:

Tony’s flipping through the jukebox; it’s almost like the soundtrack of his life, because he sees various songs. No matter what song we picked, I wanted it to be a song that would have been from Tony’s high school years, or his youth. That’s what he would have played. When I wrote it, there were three songs in contention for this last song, and ‘Don’t Stop Believin” was the one that seemed to work the best. I think it’s a really good rock ‘n’ roll song. The music is very important to me in terms of the timing of the scene, the rhythm of the scene. The song dictates part of the pace. And having certain lyrics of the song, and certain instrumental flourishes happen in certain places, dictates what the cuts will be. I directed the scene to fit the song. The singing gets more and more strident and more invested as the song goes along. Musically it starts to build and build into something as it’s just about to release. And when you look at the scene, you get that feeling.

The lyrics played a distinct role in how Chase wanted to ruminate upon the Sopranos as a family of human beings. “Just a small town girl livin’ in a lonely world, she took the midnight train goin’ anywhere,” plays as Carmela enters the diner. The lyrics “Just a city boy” play when Tony is back on camera. And then the punchline lyric: “He took the midnight train goin’ anywhere.”

“That to me was [everything],” Chase said. “I felt that those two characters had taken the midnight train a long time ago. That is their life. It means that these people are looking for something inevitable. Something they couldn’t find. I mean, they didn’t become missionaries in Africa or go to college together or do anything like that. They took the midnight train going anywhere. And the midnight train, you know, is the dark train.”

And as for the mysterious guy who shows up at the diner:

I just wanted the guy to look over. I didn’t want him to look particularly menacing. And he glances off Tony so quickly. We worked on that quite a bit so he wasn’t staring at him. The guy was like looking around the place in general. Tony doesn’t acknowledge that he sees him. Tony leads a very dangerous, suspicious life and he’s always on guard. But he’s in this old-fashioned American sweet shop with those round stools and the counter and the football hero pictures and Cub Scouts. Everything that should make him feel at ease, and yet there is a slight ill at ease feeling which we bring to it because we know who he is and what he’s done. And he can never be sure that any enemy is completely gone. He always has to have eyes behind his head.

Chase added that the tension was high during the scene, “if you think about it, for no real reason.” The fact that the Sopranos were in an everyday diner should be seen as a sense of comfort, but clever editing and brilliant acting made for the viewers reading their own anxieties into the final moments.

“I tried to build the tension and suspense as much as possible,” he conceded. Soprano daughter Meadow’s car-parking shot was meant to continue that build-up, because viewers notice she’s not seated with her parents and brother in the booth. “So the family isn’t really together,” Chase said. “I think on some subliminal level that raises the tension. We know the family should be together and they’re not.”

When he analysing the final cutaway, here’s all Chase had to say:

Whether this is the end here, or not, it’s going to come at some point for the rest of us. Hopefully we’re not going to get shot by some rival gang mob or anything like that. I’m not saying that [happened]. But obviously he stood more of a chance of getting shot by a rival gang mob than you or I do because he put himself in that situation. All I know is the end is coming for all of us.

And so the ambiguity continues. Just as Chase wanted all along.