Don Imus To John Roberts: ‘I Hate CNN’ And ‘You Must Hate Them Too?’ 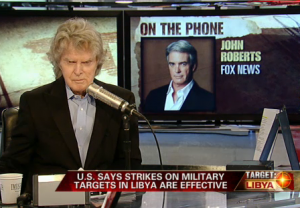 New Fox News correspondent John Roberts appeared with Don Imus this morning to share his views on being a new father and on the conflict in Libya. However, some of the most interesting parts were Imus trying to get Roberts to reveal his true thoughts about his former employer, CNN, and Roberts opening up about his awkward on-air moment scolding his American Morning co-host.

Imus was curious if Roberts thought there should be more skepticism from the media regarding America’s involvement in Libya? Roberts referenced the argument made by Howard Kurtz, to which Imus interrupted and asked if Kurtz made that point on CNN? Imus declared, “well I hate CNN, so why would you want to reference them and you must hate them too?” Roberts replied that he really liked Kurtz, but chose not to clarify his opinion on CNN as a whole. Imus agreed that he liked Kurtz too.

Later there were some other entertaining exchanges as Roberts admitted he still watches CBS even though he doesn’t work there anymore and as Imus wondered whether Roberts and his companion, CNN’s Kyra Phillips, have a “new age arrangement” where they won’t get married. Finally, Roberts discussed his moment of agitation captured live on CNN, and blamed it on someone trying to fix his nail polish while he was conducting an interview. Imus compared it to Bill O’Reilly‘s infamous outburst while taping Inside Edition, prompting Roberts to laugh and to even imitate the “we’ll do it live” moment.