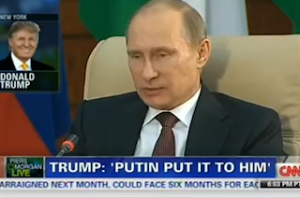 “I’m not angry,” Trump said up front, “I’m disappointed. We have a president who’s been out played by Putin to an extent that nobody has ever seen and we look very bad as a country and certainly he’s looking very bad.”

Morgan had his own criticism for President Obama, saying, “It seems to me he’s been zigzagging all over the place and not really sticking to a firm game plan. And that’s never strong leadership.”

Trump contrasted Obama’s leadership style to Putin’s op-ed. “The editorial Putin wrote in The New York Times was amazing,” he said. “It was just amazing. He said so much and he said it in a very nice way, but it wasn’t really nice at all. It was tough, about as tough as you get. Obama is having a very, very hard time competing.”

Morgan agreed, saying the op-ed “had a kind of Trump feel to it. It was a brilliant stunt and created huge noise and maximum damage to his rivals while actually appearing to be smiling and charming.”

Pointing to the piece of Putin’s piece about American exceptionalism, Trump appeared to be saying that it allowed him, for the first time, to see that idea through the eyes of a foreigner. “You think of the term as being fine, but all of sudden you say, what if you’re in Germany or Japan or any one of 100 different countries? You’re not going to like that term. It’s very insulting and Putin really put it to him about that.”

Either way, Trump said he was against any intervention in Syria. I think this country, our country has tremendous problems that we have to solve, and we cannot be the policemen of the world,” he said. “We have no idea who the rebels are. Absolutely no idea. We think they are probably perhaps as bad as Assad, maybe worse, and so we should be really tending to our own business and straightening out the United States.”