‘Don’t Do That!’: Whoopi Goes Off on View Co-Hosts’ Anti-Weed Arguments 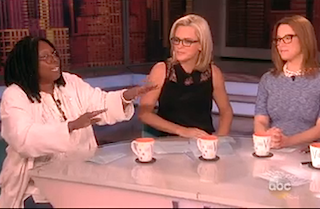 Whoopi Goldberg has never been shy about her love of all things marijuana-related, even joining The Denver Post as a pot columnist after Colorado legalized recreational use of the drug this year. So she obviously had a lot to say about The New York Times editorial over the weekend that called for the federal government to end the ban on marijuana.

The View host happened to be outnumbered by her fellow panelists on Monday, most notably CNN’s S.E. Cupp, once again filling in as the show’s resident conservative, but also Sunny Hostin, who argued that marijuana is a gateway drug that should not be encouraged.

“I was thrilled to see it,” Goldberg said of the editorial from the “so-called paper of record,” adding, “I’m very, very, very happy about it.”

Cupp began by arguing for the status quo, in which the states serve as “laboratories of democracy” without imposing legalization on states that might not support it. “Luckily it is not up to The New York Times, a New York City liberal paper to decide what everyone around the country does,” she said derisively. “The New York Times would very much like the rest of the country to get with the times and get cool and get hip to this thing.”

Hostin joined Cupp, saying she’s “against legalization” and thinks marijuana is a “gateway drug.” By legalizing the drug, she said we would be effectively telling our children it’s OK to “dissociate” and “not be in our right frame of mind.” She asked, “What’s next? Should we legalize, like, mushrooms because that’s groovy. Should we legalize cocaine?”

“I’m sorry, don’t do that,” Goldberg shot back. “Because you’re pretending people are [just] thinking and not looking at what the real issues with marijuana.” Asked where she draws the line, Goldberg said “you draw the line at things like the drugs that are killing you like heroin.” She said she knows “from experience,” just how “positive” marijuana can be, both recreationally and medically.”

She even offered to help “educate” Hostin by taking her to a place where marijuana is being grown, “because I know where you’re coming from, but you don’t know where I’m coming from.”