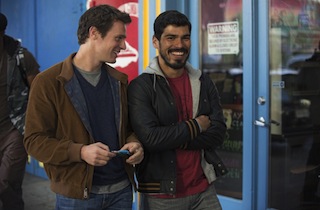 “Instead of, say, funny, mincing guys with witty one-liners and put-downs, Looking introduces three ho-hum characters you wouldn’t hang around with if they were on SportsCenter,” he writes. “Looking just portrays gay men, at least in San Francisco, as being no fun. Hard to believe.” Stingley seems to want to make the point that the show never gets its characters to come alive as humans — a point well elucidated elsewhere — a far different critique than faulting the characters themselves for failing to live up to sloppy bon vivant stereotypes.

Instead, Stingley’s the one not having any fun. He notes there’s only one substantive female character, but “she doesn’t take her clothes off.” (Has there ever been a more Esquire line written?) On the surface, this quip sounds like the opposite of The Wrap’s Tim Molloy’s objection at Television Critics Association last week that he didn’t “get” the nudity in Girls as it wasn’t titillating (to him). One guy wants more boobies, one fewer.

But they’re the same complaint: both comments posit that culture exists to excite straight men; when it doesn’t, it’s a drag. But could it be that part of the point of shows like Girls and Looking is to present women and gay men outside of a world governed by heteronormative desires—i.e., not on this earth to satisfy guys like Stingley, but for their own purposes? And would it do straight guys any harm to watch a show that didn’t place them at the center of the universe? If only there were a guide to answer such questions.

Alas, Stingley seems to have done to his readers what he accused the show of doing to him. “We apologize to anyone offended by our attempt at humor in this piece,” an editorial update reads. “It reflects one man’s viewing experience.” No fun.