Fox Business Network’s Lou Dobbs––one of the most pro-Trump voices on Fox––slammed Senate Majority Leader Mitch McConnell tonight for comments he made about President Trump yesterday.

Yesterday McConnell expressed frustration with how people complain about how long it takes for Congress to get legislation passed, bringing up President Trump’s own “excessive expectations.”

“Our new president, of course, has not been in this line of work before. And I think he had excessive expectations about how quickly things happen in the democratic process. And so part of the reason I think people feel we’re underperforming is because too many artificial deadlines––unrelated to the reality of the complexity of legislating––may not have been fully understood.”

Dobbs was outraged that McConnell would blame the President for expecting Congress to fulfill their promises, saying, “That’s what we got in the swamp, folks.”

Dobbs spoke with Ed Rollins about McConnell’s comments and at one point brought up a graphic that, well, got right to the point: 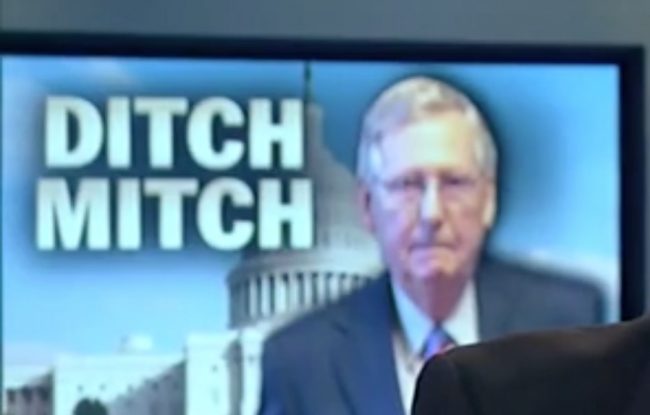 “There’s one person in Washington DC right now delivering on his promises. That man is President Donald J. Trump. And the rest, they are phony bologna. I mean, and ditch Mitch. Let’s start with ditch Mitch. And Ryan, don’t get the idea that means you are off the hook either. We got plans for you too.”

(Back in March, Dobbs called on Speaker Paul Ryan to step down.)

And yes, Dobbs has already hashtagged it:

Watch above, via Fox Business Network.