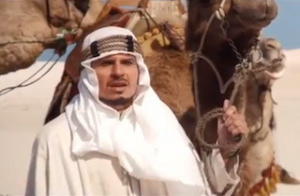 Super Bowl advertisers have been releasing their commercials earlier and earlier, mostly in an attempt to build social media buzz before the big game. But as advertisers this year are learning, with this new opportunity comes a great deal of risk.

Earlier this week, Volkswagen debuted their new ad on CNN, generating accusations of “blackface with voices” from one commentator who didn’t like seeing a white man using a Jamaican accent. Now, Coca-Cola is running into similar charges of using racial stereotypes from Arab-American groups who are objecting to that company’s use of an Arab man with camels.

But the Arab-American objections to the ad go beyond that simple cliché. In the ad, three groups set off in a race towards a huge bottle of Coke. There is even an interactive element for viewers, who can vote on whether they want the cowboys, bikers or showgirls to reach the bottle first. They cannot, however vote for the Arab man.

Imam Ali Siddiqui, president of the Muslim Institute for Interfaith Studies told NBC News, “The Coke commercial for the Super Ball is racist, portraying Arabs as backward and foolish Camel Jockeys, and they have no chance to win in the world.”

The American-Arab Anti-Discrimination Committee is also up in arms. “What message is Coke sending with this?” asked Abed Ayoub, the group’s director of legal and policy affairs. “By not including the Arab in the race, it is clear that the Arab is held to a different standard when compared to the other characters in the commercial.”

Ayoub is intending to reach out to CBS and Coke about changing the ad, which already has close to 1 million views on YouTube and an elaborate, interactive website. “I want to know why this happened and how can we fix this if possible before Sunday,”