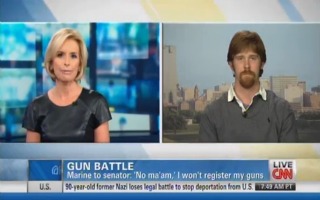 Former United States Marine Joshua Boston has written an open letter to California Senator Dianne Feinstein about her proposed gun control legislation and it’s making waves across the internet. In the letter, Boston tells Feinstein she has no business regulating guns and says he “will not register” his guns even if the bill is passed, because he does not believe it is the “government’s right” to know what weapons he owns. “Unconstitutional laws aren’t laws,” he says.

The letter was first published on CNN iReport and in it, Boston writes, “You ma’am have overstepped a line that is not your domain.” He appeared on CNN Saturday Morning to discuss his views and said he didn’t know the letter would go viral as quickly as it did.

“All the points being brought up by Senator Feinstein – a lot of it is misinformation. It’s fear-mongering,” he added. He also notes in the letter he will not have “some woman” tell him he can no longer have his weapons.

RELATED: Senator Dianne Feinstein To Chris Wallace: ‘America Has To Bite The Bullet’ On Gun Control

Feinstein’s legislation comes in the wake of the massacre in Newtown, Connecticut which killed 20 children and 7 adults. Her bill would ban the sale of semi-automatic weapons .

When asked if he thought there should be any change in gun laws after the recent mass shootings in America, Boston responded that there were already extensive gun laws in place. “The fact of the matter is predators are amongst us and we have to recognize that fact,” he said. “Our citizens have to be armed to protect themselves from these mad men.”