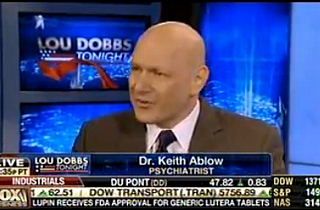 During an appearance on FBN’s Lou Dobbs Tonight on Tuesday evening, Fox News psychiatric analyst Keith Ablow suggested that President Obama‘s philosophy of greater government power and more restrictive gun control results from his being “abandoned again and again” as a child.

Ablow told Dobbs that he believes the president “hijacked” the Newtown shootings “in order to advance his desire for gun control,” which would include “disempowering the individual” in favor of stricter government rules. The president’s views, Ablow said, come from a childhood that included being “abandoned” by people.

“Controlling weapons isn’t going to stop mass killings,” Ablow said, adding that the policy emphasis should be on the “untreated or poorly treated mental illness” he believes causes mass shootings.

Dobbs added that critics generally believe Obama’s solution for every problem is “more government,” the antithesis of “self-reliance” or “independence,” the hallmarks of American values. The two agreed that Obama’s philosophy sees a reliance on the government rather than a reliance on the autonomy of the individual.

Ablow added that “the autonomy of others did [Obama] no favors as a kid, when he was abandoned again and again by people who were — quote, unquote — ‘responsible’ and supposed to do the right thing like parents. So his belief is: ‘You know what? What good is individual autonomy in decision making? What good did it do me? The collective is what needs to be empowered, and all the better if I am the center of that collective and the most powerful person in it.’”

“His solution runs psychologically in the direction of disempowering the individual every single time,” Ablow said, before concluding that “restoring the mental health system” and gun control laws are “diametrically opposed” because one empowers the individual through psychotherapy while the other “disempowers” them and limits their ability to defend themselves.

Watch below, via Fox Business Network: