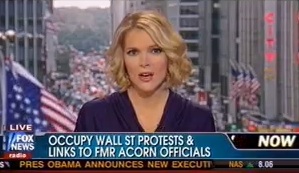 On Wednesday’s America Live with Megyn Kelly, Eric Shawn reported a Fox News exclusive that “former ACORN officials are now playing key roles behind the Occupy Wall Street movement, in part planning related demonstrations and strategy.” Kelly added that the former ACORN office in Brooklyn, is now the headquarters for a group called New York Communities for Change and its executive director, John Kest, is a former ACORN official and wrote on the organization’s blog that “the levels of inequity in this country and in New York especially are out of hand, and no one knows that more than the working families that make up the members of New York Communities for Change.”

Shawn further noted that the group received “solicited donations for a teachers’ union project, but some of that money allegedly went to help the protesters.”

“The union, United Federation Of Teachers, says the group did not raise funds for its project, and all repeated requests for a comment from the New York Communities for Change have so far gone unanswered. Well, an Occupy Wall Street spokesman did tell us, quote, ‘he has no understanding if former ACORN officials are involved in their movement,’ and he called such claims, quote, ‘unsubstantiated accusations,'” he reported. Kelly directed viewers to read the article on FoxNews.com, a report written by Jana Winter.

The Nation‘s Greg Mitchell earlier reacted to Fox News’s report by saying, “We’ve joked about this claim arriving some day and now that day has arrived!”