Fox’s Gretchen Carlson Grills Woman Who ‘Died’ And ‘Woke Up In Heaven’: ‘What Does God Look Like?’
video

Fox’s Gretchen Carlson Grills Woman Who ‘Died’ And ‘Woke Up In Heaven’: ‘What Does God Look Like?’ 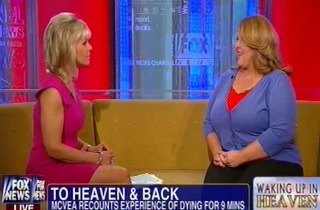 Ever wonder what heaven is like? On Tuesday, Fox News Channel co-host of Fox & Friends, Gretchen Carlson, attempted to get some answers about the afterlife from someone in the know. She sat down with the author of a new book who claims that she died on an operating table and literally “woke up in heaven.”

RELATED: Gretchen Carlson Moved To Tears As Huckabee Urges America: ‘Quit Being Ashamed That We Believe In God’

Crystal McVea, author of Waking up in Heaven, sat down with Carlson to describe the near-death experience which led her to write this new book.

McVea said that her body took on an overdose of anesthetic during a surgery which led her to have an experience she describes as standing in heaven.

“I fail to find human words that can describe what I experienced while I was there,” the published author replied.

“I saw an immense brightness – a brightness I could feel, taste, touch, hear, smell – that infused me,” McVea replied. “Not like I had five senses, but maybe like I had 500 senses.”

“Did he speak to you?” Carlson asked. McVea said that he did, “the entire time,” but not through words. Also, she does not recall the conversation because she was “only allowed to remember a few things.”

McVea said that, while she had attended church all her life, prior to this experience she was a “doubter.” She said that she would have chosen to stay with God, but he sent her back to raise her young children.