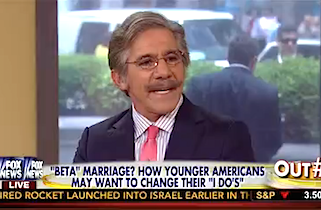 On Monday’s edition of Fox News’ Outnumbered, Geraldo Rivera said something that he predicted might elicit a “Stephen A. Smith-like reaction.” As the four female co-hosts of the show braced themselves, Rivera revealed what he believes is the most important thing a woman brings to a marriage: “her youth.”

The discussion stemmed from a survey that found more than half of millennials in favor of so-called “beta marriages” in which couples could wed for two years and dissolve the union without a divorce if both parties agreed. Rivera, who has been divorced four times before his current marriage of 11 years, explained his opposition to the idea thusly:

“I think that essentially, although there’s an increase in two income marriages, generally speaking, the man is the bread winner more often than not — although now increasingly women do work — but I think that what a woman brings to a marriage more than anything else, to a relationship, is her youth. Her youth is a fragile and diminishing, uh, resource. So if a woman were to invest two years in one of these marriages and then to be rejected by the man, I think that she has given up a valuable asset that is unequal.”

There were some audible gasps and words of disbelief from the female co-hosts, but not much in the way of substantive counter-arguments. The most Jedediah Bila could muster was, “I’m like this right now, like ‘what?'”

“The man gets everything and the woman gets nothing” from an arrangement like this one, Rivera added.

Before any of the other women got a chance to weigh in in earnest, Rivera ended the segment by teasing an upcoming piece on facial hair. The women seated at the couch took the opportunity to play with Rivera’s mustache before the show went to commercial.