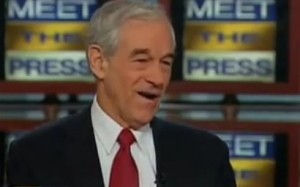 Along with Rep. Ron Paul‘s (R-TX) ascent to the top of the polls in Iowa comes the obligatory media glare. Although not as flashy as the newsletter controversy, here’s a fascinating curio from Dr. Paul’s political closet: in a Christmastime appearance on Meet The Press in 2007, Paul said that Abraham Lincoln should never have started the Civil War, instead ending slavery by having the federal government purchase all of the slaves and set them free. Like many libertarian ideas, it’s appealing unless you think about it for five seconds.

Set aside the question of, if Ron Paul disagreed with starting the Civil War, why he didn’t just tell Lincoln himself. This is serious business.

The late, great Tim Russert asked Paul about remarks he made to The Washington Post. “I was intrigued by your comments about Abe Lincoln. ‘According to Paul, Abe Lincoln should never have gone to war; there were better ways of getting rid of slavery.’”

“Absolutely,” Paul replied. “Six hundred thousand Americans died in a senseless civil war. No, he shouldn’t have gone to war. He did this just to enhance and get rid of the original intent of the republic. I mean, it was that iron fist…”

“Oh, come on,” Paul replied, dismissively. “Slavery was phased out in every other country of the world. And the way I’m advising that it should have been done is do like the British empire did. You buy the slaves and release them. How much would that cost compared to killing 600,000 Americans and where the hatred lingered for 100 years? Every other major country in the world got rid of slavery without a civil war. I mean, that doesn’t sound too radical to me. That sounds like a pretty reasonable approach.”

Sure, it’s reasonable if you’re one of the people doing the buying, selling, and “phasing out.” Take a look around. We can’t even pass a payroll tax cut extension that benefits 160 million people. How long does Ron Paul think it would have taken to muster the political will to fund a slaveowner bailout that only benefited people who couldn’t even vote? The British bailout plan that Paul refers to freed 40,000 slaves, at a cost of £20 million, 40% of the government’s total annual expenditure. There were almost four million slaves in the US when the Civil War began.

As for that newsletter controversy, Ron Paul has consistently expressed regret over what he says was a mistake, and in the years I’ve been covering him, nothing I’ve seen or heard from him would lead me to believe that the ideas in those newsletters reflect his beliefs. Having said that, part of making up for a regrettable mistake is facing the music for as long as it plays. If people still have questions about it, Paul owes them answers, just as surely as he is owed the chance to give those answers.