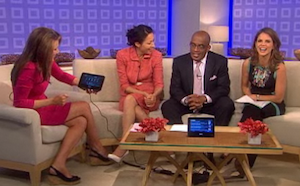 The Today show’s “Modern Love” casting call for couples to compete for a Today-sponsored wedding isn’t quite modern enough for the Gay and Lesbian Alliance Against Defamation since the morning show is refusing to consider same-sex couples.

GLAAD has issued an action alert complaining that Today is excluding same-sex couples and not buying the show’s argument that the couple needs to get married in New York , which does not permit same-sex marriage.

The Today Show is awarding a wedding celebration, not a marriage license. If a same-sex couple won the contest, producers and the winning couple could easily work together to ensure that the couple properly obtained and complied with the requirements of a marriage license in one of the license-conferring jurisdictions.

Today has defended the exclusion by saying that the wedding will take place at Rockefeller Center and therefore they are bound by New York law. While GLAAD argued that New York will recognize marriages from other states and therefore there wasn’t a problem, that doesn’t get around the main issue that a same-sex couple can’t legally get married in New York.

So should legal technicalities overwhelm the significance of including same-sex couples in their “Modern Love” celebration?  I mean is there anything more “modern” than same-sex couples?

This is one of those situations where Today is in a bind.  No one, not even GLAAD, would likely argue that Today is a bastion of gay intolerance. If Today was produced in Washington, D.C. or Des Moines, Iowa, or New Haven, Conn., it’s likely they would include same-sex couples.  But the law hasn’t caught up with either GLAAD or Today‘s good intentions, so they are stuck with showcasing a not-so-modern version of love.