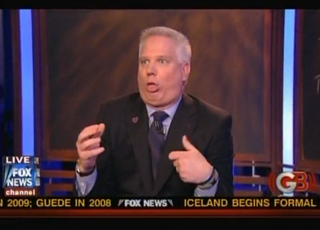 Glenn Beck seemed to have reached the pinnacle of potential shock value to be had out of The New York Times‘s David Carr making a bad joke comparing Middle Americans to neanderthals on his radio show this morning, calling it the sort of comment “that leads to mass death.” He managed to top himself on his television program today, however, imitating a disabled person to give viewers a sense of what he thinks Carr believes people in the middle of the country are like.

Mocking the President for being “a brilliant Harvard pragmatist”– with these kinds of insults, who needs compliments?– Beck turned the conversation from the “alleged” education of the President to the “alleged” ignorance of those in the middle of the country who oppose him, as described by Carr. This time, however, he refrained from evoking the horrors of early 20th century euthanasia projects and death camps, instead opting to behave like “those people with the low-sloping foreheads, the Neanderthals,” as Carr called them on Real Time with Bill Maher.

Except Beck’s imitation of Neanderthal wasn’t so much ape-like but downright… disabled. He was fairly plainly, amid the twitching and bizarre facial expressions, behaving like someone with a serious mental deficiency– which, in some sense, made his point. Beck claims that, according to Carr and other “elitists” (read: people who are respected for knowing things about politics), the Johnny-come-latelys who have never participated in government until the Tea Party came around are to be treated as if their ideas are the product of some sort of mental illness– as if they themselves are mentally disabled. In the process, though, Beck stopped making fun of Carr and very visibly made fun of the mentally disabled.

The nuance of his joke was entirely lost, to the point where it would be perfectly valid for those with handicaps and their loved ones, or anyone with a sense of decency about how the disabled should be treated in our society, to be offended by this conduct. Beck’s transgression into offensive territory is certainly not new in political media– plenty of people on the left and right have had the internet equivalent of rotten tomatoes thrown at them for similar mockery, as is appropriate to maintain civil discourse. But that he isn’t the first (and, unfortunately, probably not the last) to pick on the weakest in our society to gain political points with his audience is no excuse to do so, reprehensible comments from what to Beck are “the bad guys” notwithstanding.

The segment via Fox News below (and below that, Carr’s comment on Real Time this weekend):