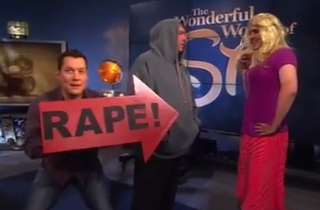 Yesterday, in the middle of a segment about Elliot Rodger‘s motivations in the recent UCSB shooting, TheBlaze’s Jeff Fisher and a bunch of his man friends decided to respectfully question the statistics cited by many anti-sexual assault groups about “rape culture.” And by “respectfully,” we mean “they dressed a man as a ditzy oversexed blonde, and had him act in a series of comedy sketches mocking scenarios that would actually lead to sexual assault, and also there was a giant ‘RAPE!’ arrow.”

Talking Point Memo reports that the sketches, which aired yesterday on BlazeTV, were pre-recorded and initially made to complement a post by Beck’s sidekick, Stu Burguiere. He argued that most of the statistics reported by the Campus Sexual Assault Study and the 2010 National Intimate Partner and Sexual Violence Survey, which President Obama recently cited in a speech condemning campus rape, were wrong. TPM writes of it:

Burguiere spends most of his time trying to debunk the 2010 study, arguing that the questions asked weren’t actually about sexual assault, which in turn led to inflated statistics.

“But, how do you figure out if someone’s been raped? One way would be to ask the person if they have been raped. But, why do that when you can ask misleading questions and try and figure it out for yourself!” he wrote. “The study asked questions like: ‘When you were drunk, high, drugged, or passed out and unable to consent, how many people ever had sex with you?'”

He turns to the “beer commercial” to argue that alcohol does not always lead to sexual assault.

“Newsflash, but it is possible to have consensual sex while drunk or high. Watch any beer commercial. What you will see is a bunch of hot women and good looking dudes drinking beer with the strong insinuation they will soon be hooking up,” he wrote.

And from that, came this well-timed sketch, which oh-so-helpfully defines what is and isn’t rape. Most of these scenarios are comically under-developed, but then again, you can’t expect much when someone uses a giant arrow with the word “RAPE!” on it to make a point about a sensitive topic.

UPDATE — 5:49 p.m. ET: In the interest of fairness, Burguiere’s monologue was packaged in a longer form on his own show, Wonderful World of Stu. Watch the full discussion below: