Glenn Beck Doesn’t Give A Toss About Prince William’s Engagement, Cares Much More About The TSA 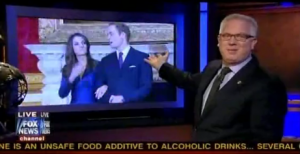 Glenn Beck really doesn’t care about Prince William’s engagement to Kate Middleton (or Prince Harry’s to Princess Leia, or Prince Jake to Princess Buttercup, or any of the other hilarious faux-mistakes he made during today’s program). However, after he was done his explaining just how little he does care about it, he explained that he does care about the media covering it instead of TSA’s new security measures. That he cares about a lot.

After his Prince William opening, which alone was more entertaining than a dozen George Soros specials, Beck gave a run down of all the TSA hoopla, comparing the pat downs to “a scene from a Danielle Steel novel,” and wondering why the media has avoided it in favor of flashy royals getting hitched. While Beck is certainly right that the amount of media attention following the engagement is ridiculous, it seems strange to imply that the media is overlooking the anger and paranoia surrounding the new airport regulations considering it’s been covered all over the place…for months. As to Beck’s assertions that this can all be connected back to Soros and his various plans to destabilize America, I’ll leave it up to you all to decide the veracity of that.

However, there was one other point on which Beck was 100% correct and it’s a point that hasn’t been said enough. The people delivering these pat downs and putting you through these scanners aren’t “the bad guys.” The security teams didn’t make these rules, they’re just the ones who are going to get screamed at all day about them.

Check out some clips from Fox News below. The first details Beck’s opinion on the royal engagement. The second is the meat and potatoes of his TSA complaints.