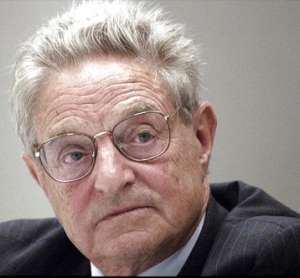 Kajillionaire activist, Media Matters funder, and to hear Glenn Beck tell it, Puppetmaster of the coming One World Government George Soros is reportedly pulling on some strings. According to reporting by HuffPo’s Sam Stein, Soros told a private gathering of progressive donors that “Democratic donors (should) direct their support somewhere other than the President.”

An adviser for Soros later told Stein that Soros was not suggesting a primary challenge to President Obama, but given the gurgling to that effect over at Fox News, that denial is not likely to carry too far.

According to multiple sources with knowledge of his remarks, Soros told those in attendance that he is “used to fighting losing battles but doesn’t like to lose without fighting.”

“We have just lost this election, we need to draw a line,” he said, according to several Democratic sources. “And if this president can’t do what we need, it is time to start looking somewhere else.”

…”Mr. Soros fully supports the president as the leader of the Democratic Party,” said (Soros adviser Michael) Vachon. “He was not suggesting that we seek another candidate for 2012. His comments were made in a private, informal conversation that was about the need for progressives to be more forceful in promoting their agenda. He was stressing the importance of being heard by elected officials.”

The frustration liberals and progressives are feeling toward the Obama administration has mainly to do with the weak signals the White House has been sending about standing up to the post-midterm Congressional Republicans. Vachon’s denial aside, perhaps administration fear of a primary challenge isn’t the worst thing in the world for progressives. As a practical matter, though, it is extremely unlikely that the Democrats would challenge their own incumbent, and certainly not two years out from the Presidemtial election.

Still, the fact that such a move would be political suicide for progressives probably suits Glenn Beck just fine, so look for Beck and other right-of-center media types to puff as much air as possible into this report.