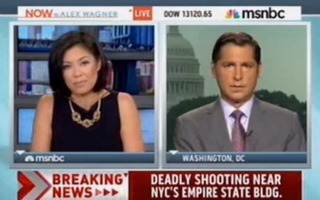 In a canned gun control segment on MSNBC’s Now with Alex Wagner that has run in some form multiple times over this summer due to the increase in high profile shootings, the panelists engaged in an conversation which included a veritable potpourri of liberal justifications for stricter gun laws. The explanations that the MSNBC panel guests reached for to explain what they consider to be an increase in violence (not an increase in coverage) include a lack of civil discourse, American culture and the gun lobby. Notably absent from the hysteria-driven coverage was any note that gun violence, by and large, is down and American support for gun control continue to plummet.

In a nearly identical segment to the one that followed the mass shooting in Aurora, Colorado in July following the Dark Knight massacre, MSNBC’s Now guests and host (who made no secret of her desire to dispose of the Second Amendment) set right about politicizing Friday’s shooting at the Empire State Building.

Dan Gross, president of the pro-gun control group Brady Campaign, told Wagner that he believes the American people will come together to say “we are better than this.” That phrase, coincidentally, is also the name of a national effort by the Brady Campaign to strengthen national gun control laws.

Gross also was able to predict the future, claiming that “48,000 Americans” will die from gun violence in the term of the next president unless something is stopped – thereby demonstrating the faulty logic in straight-line projections.

Washington Post columnist Jonathan Capehart was quick to blame the ever culpable National Rifle Association for the acts of a deeply troubled individual who shot his former boss and proceeded to engage in suicide-by-cop in the streets of Midtown Manhattan during the morning rush hour.

“What’s sitting in that disconnect between the American people and their elected officials is the NRA,” said Capehart. “How do you get the NRA to back down or, more importantly, get elected officials to stare down the NRA?”

Actually, the only measurable disconnect is between Capehart and the American people. America’s elected officials seem to be pretty well informed of where public opinion is on the matter of gun control. Pew Center polls following every high-profile shooting since 2007 show support for stricter gun control laws continues to decline at a steady pace. 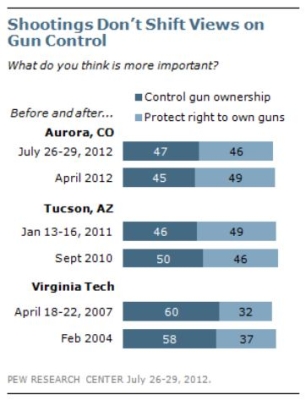 Even after the Aurora shooting, poll respondents were more likely to say that recent incidents of gun violence are due primarily to disturbed individuals rather than a systemic problem with society. 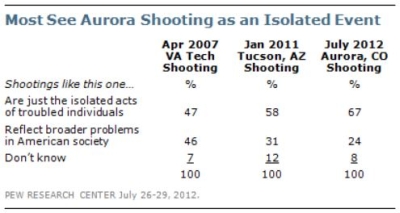 Had the Now panelists actually sought to inform rather than terrify/galvanize their audience, they would have cited the FBI’s Preliminary Annual Crime Statistics from 2011, released in June, showed violent crime is down from 2010. In fact, violent crime is down by more than 5 points in major cities.

In 2011, all four of the violent crime offense categories—murder and non-negligent manslaughter, forcible rape, robbery, and aggravated assault—declined nationwide when compared with data from 2010. Murder and non-negligent manslaughter declined 1.9 percent, while forcible rape, robbery, and aggravated assault each declined 4.0 percent.

In New York City alone, the murder rate is near record lows, even amid a recession which is increasing the number of Americans living in poverty – no doubt, some of the gun control advocates also subscribe to the root cause theory as noted conservative ideologue (sarcasm, off) John Avlon succinctly describes in The Daily Beast.

The truth is that the gun control script has not been significantly amended since the 1999 murder of 12 students at Columbine High School. No matter the nation’s changing circumstances, the story remains the same. Guns are dangerous and violence is on the rise, facts be damned, and only the curtailing of the U.S. Constitution can save us from ourselves.

But by not addressing real data and real circumstances, purveyors of the theme that gun control is both necessary and desirous limit their audience to those that already agree with them. MSNBC’sNow panel is preaching to the converted.