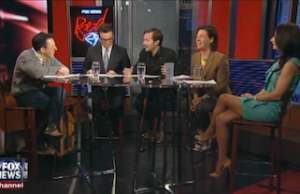 Red Eye host Greg Gutfeld asked Mediaite to write about the Fox News show’s segment this morning about conspiracy theories, and we are more than happy to oblige. After panelist Michael Moynihan declared that “most polls are stupid,” Gutfeld predicted that Mediaite would take the show’s edited-down soundbite and make Moynihan look “racist” for all. “I want that on Mediaite tomorrow,” Gutfeld said. Well, he didn’t have to wait that long.

The group were discussing a recent poll from Public Policy Polling on conspiracy theories that asked Americans about questions like whether aliens exist (a whopping 29% answered yes) and whether the moon landing was faked (only 7% think so). Instead of debating whether they believe in the specific conspiracy theories Gutfeld and his guests mostly debated the “stupidity” of the poll itself, with Moynihan calling it “the dumbest poll ever.”

For his part, Fox contributor Jonathan Hunt wanted to make sure Mediaite knows that “I love all polls,” a point that has been duly noted. Same goes for Bill Schulz, who agreed with Hunt saying, “I love polls.” In a possible dig at former Fox News host Glenn Beck, Schulz added about conspiracy theorists, “you know what the one constant is? Chalkboards.”

Later in the show, Andy Levy came out for his “Halftime Report” and added some more insight to the conspiracy theory discussion. After riffing on some of the stranger conspiracy theories in PPP’s poll, Levy asked, “Jonathan, do you really think we can’t take you saying ‘I love all polls’ out of context?”

Watch both videos below, via Fox News: