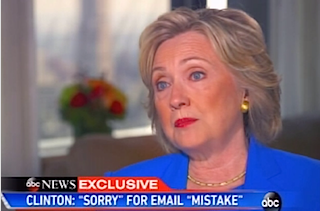 As we learned in ABC News’ brief preview of David Muir’s sit-down interview with Hillary Clinton, the Democratic frontrunner admitted, for the first time, that using a private email server was a “mistake,” saying, “I’m sorry.”

Clinton stressed again that the decision to use a personal email address and server was “allowed” by the State Department, but she still believes it was a “mistake” to do so.

“What I had done was allowed,” she said. “It was above board, but in retrospect, certainly, as I look back at it now, even though it was allowed, I should have used two accounts, one for personal, one for work-related emails. That was a mistake. I’m sorry about that. I take responsibility.”

Confronted by a New York Times report that found two of her emails were classified at the time that they were sent or received, Clinton pushed back on that assessment. “The State Department disputes that,” she said. “I understand why different agencies have different views, and I respect that. It does not change the fact that I did not send or receive any information that was marked classified at the time.”

Later in the interview, Muir pressed Clinton to say whether she believes Vice President Joe Biden would make a good president, should he get into the 2016 race. At first, Clinton would only say that she “likes” Biden, but then admitted that he “could be a good president.”

Finally, Muir asked Clinton if, in her “most private of moments,” she ever asks herself, “Why am I doing this again?”

“Yes, of course. because it really is hard,” Clinton replied. She even choked up a bit as she recalled mother’s “terrible childhood.” She said, “I don’t want to just fight for me. I mean, I can have a perfectly fine life not being president. I want to fight for all the people like my mother who need somebody in their corner, and they need a leader who cares about them again.”

Perhaps this is the next step in Clinton’s grand plan to “show more humor and heart” in her campaign.