How Did ABC World News Mess Up This Report So Badly? (UPDATED) 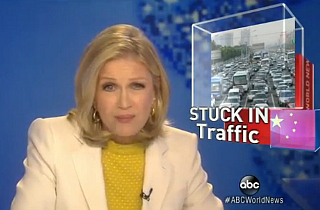 This might be one of the goofier examples of sloppy journalism in recent memory.

During ABC’s World News on Thursday evening, anchor Diane Sawyer read a quick story about a massive Chinese traffic jam just outside Beijing, reportedly “now entering its third week.” The traffic has come to such a standstill, Sawyer added, that truckers purchased noodle dishes from roadside villagers. Ultimately, the report concluded, the traffic will end around September 17th when the culprit — some major construction — is scheduled for completion.

So what’s wrong with that story? Well, there’s one big problem: That ridiculously large traffic jam happened three years ago.

How did that embarrassing mistake make it all the way to Sawyer’s mouth?

The only 2013-dated articles on this “traffic jam” appear on the India Times website and on The Daily Beast’s “Cheat Sheet” link dump. The former’s write-up says the traffic has been ongoing for only nine days, so clearly that’s not the source. And given the Beast’s popularity in America, this little blurb could be where ABC first spotted the story: 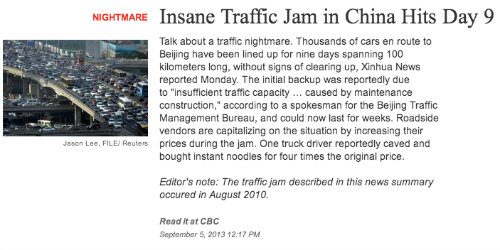 It seems as though the Beast mistook the story to be current, but later updated their link-out with a correction: “Editor’s note: The traffic jam described in this news summary occured [sic] in August 2010.”

So let’s assume an ABC producer found the story there, but saw it before the Beast updated to reflect the actual date. They would still have had to completely ignore the time and date on the actual CBC article containing many of the details Sawyer reported on air.

How, then, did ABC obtain the oddly-specific information about the jam having gone on for three weeks? Looks like they saw the reports (again, ignoring all the 2010 timestamps) and saw that the traffic began on August 14th. And hey, it’s September 5th. So that means it’s been going on almost three whole weeks!

And how did ABC find information about it expecting to end September 17? The biggest source for that is a Wall Street Journal article — again, from 2010 — that notes the 17th as the construction’s end date.

In other words: Reporting this story likely took a producer eyeing not one, but multiple articles. And somehow… missing… the time and date… on each… and every one of them.

Amazingly, ABC News itself actually covered the story when it first occurred.

Another question: Who obtained those photographs of the Chinese traffic jam without noticing they were from 2010?

Watch the report below, via ABC News:

UPDATE: Diane Sawyer issued an on-air correction Friday night, which you can watch below.