‘I Want the Hulk!’: Fallon Practically Begs Christie to Run for President
VIDEO

‘I Want the Hulk!’: Fallon Practically Begs Christie to Run for President 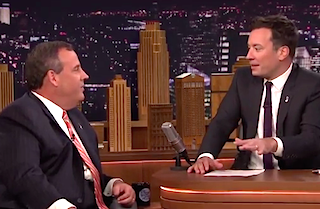 Jimmy Fallon and Gov. Chris Christie (R-NJ) have a long and (mostly) loving relationship. They have slow jammed the news together, performed the “Evolution of Dad Dancing,” and collaborated on “Thank You Notes.” And of course, Fallon recruited Christie’s biggest hero, Bruce Springsteen, to nail the governor with a Bridgegate-themed version of “Born to Run.”

All of this means that a Christie presidential run would be nothing but good news for the Tonight Show, a point Fallon made no attempts to hide when the potential candidate sat down with him for an interview Wednesday night.

After Fallon got Christie to publicly endorse his new Ben & Jerry’s ice cream flavor, The Tonight Dough, the host asked him point blank if and when he is planning to get into the 2016 race. “I thought it was Meet the Press,” Christie joked, laughing out loud at Fallon’s attempts to get serious.

Christie said he would be letting everyone know about his plans some time in May or June, but that wasn’t good enough for Fallon, especially when he refused to criticize the GOP candidates who have already announced. “I want the Hulk!” Fallon told him. “I want the Hulk to come out, I want you to get green, I want you to get loud… We love that guy!”

“There’s only one Chris Christie,” the governor told Fallon, assuring him that if he does run he won’t be changing his opinions or softening his town. “I’m going to be myself and if they like it, great, and if they don’t, I can get another job.”

Now we just have to wait and see if Fallon holds him to that standard if and when he does end up on the campaign trail.