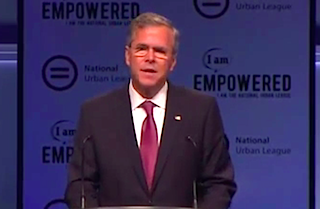 A Republican presidential candidate saying something positive about President Barack Obama is so rare that it counts as news. And though it was followed by some caveats, Jeb Bush did give the president credit for “speaking the truth” on racial injustice during a speech to the National Urban League on Friday.

Bush was touting his record on education when he decided to quote something Obama said during his eulogy for the African-American churchgoers killed in Charleston, South Carolina last month.

“When President Obama says that ‘for too long we’ve been blind to the way past injustices continue to shape the present,’ he is speaking the truth,” Bush said to applause from the audience in attendance. “But we should be just as candid about our failures in addressing injustices of the more recent origin,” he added in an attempt to move the focus from past to present.

At the same event, Hillary Clinton offered up some direct criticism of Bush by calling his super PAC’s slogan into question. “I don’t think you can credibly say that everyone has a right to rise and then say you’re for phasing out Medicare, or repealing Obamacare,” Clinton remarked. “People can’t rise if they can’t afford health care. They can’t rise if the minimum wage is too low to live on. They can’t rise if their governor makes it harder for them to get a college education. And you can’t seriously talk about the right to rise and support laws that deny the right to vote.”

Clinton also called out Republican candidates for telling the Urban League what they want to hear, but not following through when it comes to actual policy. “The real test of a candidate’s commitment is not whether we come to speak at your national conference,” she said. “It’s whether we’re still around after the cameras are gone and the votes are counted. It’s whether our positions have lived up to our rhetoric.”