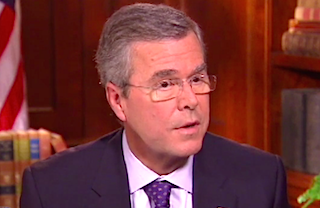 Megyn Kelly‘s big “exclusive” interview with Jeb Bush has not even aired yet and it is already producing some big headlines. First, in a preview clip released on Sunday, the former Florida governor and likely 2016 Republican presidential nominee said he would have made the same decision to invade Iraq that his brother, President George W. Bush, did in 2003.

Now, in comments obtained by Bloomberg, Bush has told Kelly that as president he would not immediately attempt to roll back executive actions on immigration taken by President Barack Obama last year, as many of the GOP rivals have vowed to do.

In an interview scheduled to air Monday night on Fox News, Bush suggested that he would wait until a new law was in place before overturning Obama’s actions.

Noting the political difficulty of repealing the orders, host Megyn Kelly asked Bush how he would go about undoing them. “Passing meaningful reform of immigration and make it part of it,” Bush answered, according to a transcript of the interview. The interview will air in full on The Kelly File at 9 p.m.

Bush, who hasn’t yet formally entered the presidential race, also defended his support for giving undocumented immigrants driver’s licenses and their children in-state tuition, saying, “If you’ve been here for an extended period of time, you have no nexus to the country of your parents.”

“What what are we supposed to do? Marginalize these people forever?” Bush said.