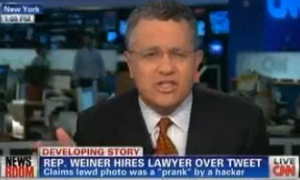 CNN’s legal analyst Jeffrey Toobin appeared on the air, right after Andrew Breitbart, to discuss the ongoing “Weinergate” story. Yet Toobin was much more agitated by what just happened on CNN than by anything related to Democratic Congressman Anthony Weiner’s Twitter ordeal. According to Toobin, the Twitter picture controversy is just a “mild prank,” but Breitbart’s comments about Weiner were truly what was “outrageous.”

“What Andrew Breitbart was insinuating about [Weiner] with young girls and stuff is outrageous. And frankly, it’s too bad that he got to say that stuff on CNN. Look, this is a light-hearted story. This is a silly little thing that happened, it’s not a big deal.”

Toobin concluded that “on the Internet, stuff happens” and the lesson here is you can’t always trust Twitter. Randi Kaye admirably played it down the middle with both Breitbart and Toobin, and suggested the story isn’t being dismissed as quickly as Toobin might like because for some reason Weiner hired an attorney rather than report the incident to federal authorities. Toobin responded that the famous expression “don’t make a federal case out of it” is the appropriate tone here, “and to turn it into something more than a mild prank – hack – whatever you want to call it, seems really excessive.”

Breitbart and many of his fellow conservatives allege a liberal media bias is often in full display by the different treatment Democratic and Republican politicians receive by the press when they are entangled in any alleged wrongdoing. Toobin responding, “I just don’t think it’s a big deal,” certainly seems to fit Breitbart’s expectations; however, the fact that Kaye and CNN are devoting time to investigating the story at least demonstrates an honest attempt to get to the truth, no matter Weiner’s political affiliation.