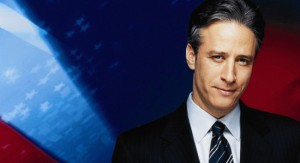 The clearest sign of the political cowardice and intellectual impotence of liberal America is its collective worship of Jon Stewart. Once upon a time, The Daily Show was probably funny – that’s presumably why it appears on Comedy Central. But Stewart long ago turned into the Oprah Winfrey for urban hipsters, his self-appointment as the arbiter-in-chief of smirking moderation masking a profoundly reactionary worldview.

Stewart is reaping accolades this week for his handling on Monday night of the shooting in Arizona that left six people (including a judge) dead, and fourteen people wounded, most notably the Democratic congresswoman Gabrielle Giffords.

As Mediaite’s Colby Hall reported, Stewart didn’t bother trying to bring the power of political satire to bear on the issue. Instead he went full-emo, taking “a meaningful, measured and earnest approach to the current political finger pointing over the incident.” Which is to say, instead of taking sides, placing blame, and ultimately doing the satirist’s crucial job of holding a mirror up to power, he took the safest route imaginable and blamed the media:

“It would be really nice if the ramblings of crazy people didn’t in any way resemble how we actually talk to each other on TV.”

Gee thanks Jon. You know what would be nice? If Republicans weren’t hell-bent on gutting every serious attempt at legislation that would keep semi-automatic pistols with 30-round clips out of the hands of lunatics. But no, here’s Uncle Jon once again, handing everyone their twitter-points for the next day:

“Boy would it be nice to be able to draw a straight line of causation from this horror to something tangible… You cannot outsmart crazy”.

As it happens, “you can’t outsmart crazy” is the preferred conservative framing of the Arizona shootings. Writing for the National Review Online, the war historian Victor David Hanson mocked any attempt to tie Jared Lee Loughner’s rampage to anything the right has said or done. Loughner, he said, “more likely fit the profile of an unhinged killer like Ted Kaczynski or John Hinckley” than that of some rabid partisan or cold-blooded political assassin. Thanks to the “political vultures” on the left, we are suddenly back in “a 1963 mood of blaming politics for deranged shootings.”

But blaming the media is the last refuge of the failed satirist, the TV-host equivalent to a dying stand-up comedian picking on the fat guy in the front row. After all, everyone hates the media. So while we can all agree that Acorn was as bad as the Tea Party, and that Keith Olbermann is as over the top as Bill O’Reilly, treating the media as the essence of the problem has the ultimately conservative effect of encouraging acceptance of the political status quo.

This is not the first time that Stewart has taken refuge in media criticism as a way of avoiding the tough questions of the day. His 2004 appearance on Crossfire established him as a so-called voice of reason, even though all he really did was sit there and condescend to his hosts, repeating “just stop,” over and over again.

And then there was last October’s Rally For Sanity, where he repeated the shtick in front of a quarter million people on the Washington Mall. Did he dare make the obvious and necessary point, which is that since Obama’s election, the Republican Party has descended into vicious nihilism? Nope. As David Carr wrote about the rally in the New York Times:

“So instead the host of ‘The Daily Show’ took steady aim on the one American institution that everyone can agree to hate: The Media. Within the first minute of his deft, very articulate stump speech at the end of the rally, Mr. Stewart turned his gun sights on the, um, fake news, which he called, ‘the country’s 24-hour political pundit perpetual panic conflictinator,’ which, he added, ‘did not cause our problems, but its existence makes solving them that much harder.’

‘The press can hold its magnifying glass up to our problems bringing them into focus, illuminating issues heretofore unseen or they can use that magnifying glass to light ants on fire and then perhaps host a week of shows on the sudden, unexpected dangerous, flaming ant epidemic,’ he said, to roars of approval from the crowd.”

Ah yes, to roars of approval from the crowd, the same roars of approval that Roman emperors once used to keep the people complacent. Instead of throwing gladiators to the lions we now throw journalists before the mob, and pray that no one notices that all they are doing is eating the messenger alive.

Leave it to Mediaite’s own Rachel Sklar to call bullshit on this oh-so-meta media self-flagellation. As she tweeted Tuesday afternoon:

Andrew Potter is a columnist for Maclean’s Magazine, and the author of The Authenticity Hoax: How We Get Lost Finding Ourselves, published by HarperCollins.