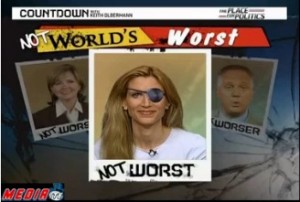 One by-product of Ed Schultz‘s attack on Laura Ingraham, and subsequent apology and suspension, is that it gave his former MSNBC colleague, Keith Olbermann, an opportunity to answer for some of his own past wrongdoing. As he tweeted condemnation of Schultz’s remarks, he was confronted with some of his own. His responses provided a neat contrast to Schultz’s apology, particularly one involving right-wing firebreather Ann Coulter.

The degree of offense in Schultz’s case was extremely high, but Ingraham has since accepted his palpably heartfelt apology, a marked departure from the “sorry if you were offended” style of tua culpa that many political and media figures favor these days. As the fingers pointed at Olbermann on his Twitter feed, that contrast became ever more apparent.

To Olbermann’s credit, his recent feudin’ words (he recently called Schultz a “supposedly liberal commentator”) did not bleed over into his tweets about the Ingraham flap, keeping the focus where it belonged, on Schultz’s words:

There is no excuse for any political commentator calling any woman a “slut,” least of all Laura @IngrahamAngle

He also responded to the predictable notion from some liberals that Ingraham deserved what she got:

@FiftySeth @IngrahamAngle Trust me, I know all about her words. You want to call her Xenophobic? Crass? Unintelligent? Fine. “Slut”? No.

The faint defense seems reasonable, until you realize that Olbermann and Ingraham used to date each other(!):

Olbermann, of course, has been accused of having his own problems with women, and some of those chickens came home to roost last night. Olbermann wasn’t ready to apologize for calling Michelle Malkin a “mashed-up bag of meat with lipstick on it,” but he did take time to defend the remark, and engage in some passive-aggressive sparring with Malkin over it. Sorry, Keith, she’s married!

But when confronted over his transphobic remarks about Ann Coulter, Olbermann did express some regret. A little over a year ago, Olbermann responded to some Coulter remarks by saying, “If this guy wants to live his life as a woman, I’m gonna back his choice up 100%.”

Granted, Coulter had, herself, just questioned Olbermann’s own sexuality (and that of then-Countdown contributor Richard Wolffe), as well as made a cruel reference to Olbermann’s deceased mother, but as Olbermann now realizes, “It’s not a question of what THEY would do, it’s what WE do.”

At the time, Olbermann didn’t apologize, or respond to criticism over the remark.

When confronted about it last night, though, he expressed regret:

@thisdaydreamer @juicefernandez Agreed. I was out of bounds to even dance around that.

I wasn’t exactly sure this was an apology, but when Kate Doak (a contributor to my personal blog) also confronted him, asking “why have u used Transgenders as punchlines to slander others in the past?” Olbermann replied,”I was wrong to do that, and I apologized for it here.”

He’s apparently not ready, though, to reconsider his treatment of Carrie Prejean.

His willingness to admit he was wrong about Coulter does show some progress, but his inability to see that the way he expresses his hostility toward conservative women (explanations aside) has become a low-hum version of Schultz’s offense is a problem, not just as a human being, but as a liberal. One of the basic pillars of liberalism is the recognition, and protection, of the humanity of others. It becomes impossible to defend anyone’s humanity if you routinely fail to recognize it yourself, even in those with whom you disagree.

Schultz, as my friend Greta Van Susteren observes, seems to get it. Perhaps Keith Olbermann is on his way, too, but he’s not there yet. When you’re a political scrapper, it can be hard to admit when you’re wrong, but as Schultz demonstrates, if you do it right, people can be surprisingly forgiving.