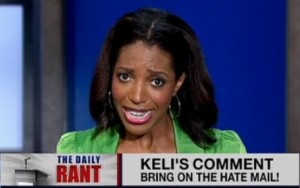 TheLoop21.com‘s Keli Goff capped off Monday’s edition of The Dylan Ratigan Show with a “Daily Rant” about the state of internet criticism, both via email and comment forums, that nearly caused me to stand up and cheer in my living room. Sending vile comments into the “trash” folder, or deleting them from the comments section, is a barely-noticeable reflex action, but just above that low bar are types of comments that are really irksome. Goff offered some great advice to the cellar-dwellers.

Too often, the SOP on internet comment threads is simply to try and make them as non-vile as possible, but the beauty of Keli Goff’s rant is that it moves those goalposts, and asks critics to actually add value to the conversation.

Goff began by saying that criticism doesn’t bother her, as it’s a sign that people are reading, and thinking about, what she’s written. “If you’re a writer and no one’s criticizing your work, that means very few people are actually reading it,” she said.

“One thing that does get under my skin when it comes to my critics,” Goff continued, “is poorly crafted criticism.”

She then offered some helpful tips to making criticisms that actually have some value.

“First and foremost,” Goff said, “actually read what you’re talking about. I’ve lost count of how many times someone has sent me a letter or left a comment, taking me to task for not saying something in a column. Only, I did say it, in the second paragraph, which the person apparently didn’t bother reading.”

She points out that sites like Gawker have taken to banning commenters who display such laziness. While many sites have a “more is more” attitude toward comments, I’m all for this kind of quality control.

I would add a similarly irksome brand of comment to this point, the “Well, where were you when x did y and z?” Challenging the consistency of a writer’s argument, without actually checking to see if the writer has been consistent, is lazy, and is rarely accompanied by a substantive disagreement.

Goff also instructs critics to explain why they disagree with the writer. “If you say, I disagree with your piece because you neglected to mention x, which contradicts y, you’ve just taught somebody something new, and probably made his work product better in the process.”

She concludes by advising would-be critics to “be funny” if at all possible, but not before cautioning against name-calling, which is a particular bug at many websites. Comments of a personally insulting nature are not just off-putting, they can ruin a site for all the good readers. This is especially true at a site like Mediaite, where readers have a unique opportunity to communicate, not just with our writers, but with the media figures we cover. Mainstream news personalities and producers are avid readers of Mediaite, and if the comments section is inviting and constructive, they’ll be avid readers of it, as well.

However, when they’ve got to pick through 20 or 30 pieces of nonsense (or worse) to find anyone who’s truly interested in offering substantive criticism, it trains them to ignore the comments, and it trains good readers not to waste their time.

Keli Goff says “Bravo” to Gawker for its comments policy, but I say “Brava!” to Goff for challenging (usually anonymous) critics to contribute something of value to the discussion, rather than simply push the limits of what will get them banned.