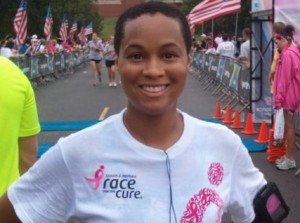 KTBS-TV Meteorologist Rhonda Lee was fired by the Shreveport, La, ABC affiliate for violating a social media policy that she says was never communicated to her. Last month, Ms. Lee responded, on Facebook, to a viewer who observed that the children who won an annual toy giveaway “lets say, are people of color,” and accused the station of “racism.”

Lee’s response, she says, cost her her job, despite the fact that the policy she was told she violated was “not written down,” and was supposedly communicated at a newsroom meeting that she did not attend.

Not to start any trouble, because I think that the annual “Three Minute Smile” is a great function and I love to see kids so happy. Am I the only one that has noticed that this year, all the kids, lets say, are people of color? This is Channel 3, not KSLA, the “Project Pride” network, that might as well be part of the BET channel. Did KTBS slip up on a news story, and owe S’port’s criminal mayor Cedric, a favor? Seems like some racism going on to me. Just saying…..

Has anybody else noticed that this years “3 minute smile” contestants are all of the same race? I thought this was Channel 3, and not KSLA the “Project Pride” network. Looks like racism to me. Not to put it down… I think it’s great for the little kids to get such a chance, but come on….. Are Ya’ll on Cedric Glover’s secret payroll now?

Ms. Lee responded to the comment the following day, in admirably measured fashion:

I’m not sure I understand your comment. “…this is Channel 3 not KSLA…” What are you trying to say?The children are picked at random. So there goes your theory that they are selected for their color. I would like to think that it doesn’t matter who the child is. If you truly just want to see the kids happy your message had a funny way of showing it.Happy holidays. –Met. Rhonda Lee

Not measured enough, apparently, because Ms. Lee is gone, while Kenny Moreland’s comment is still there. Rhonda Lee told Journal-isms‘ Richard Price that she was the one who alerted the station to the offensive comment, but rather than take it down, the station took her down:

“I was the one who brought it to their attention after they let it fester on the page for 6 days, but was then chastised for responding at all. I sent a screen grab to my boss via e-mail telling them that I’m ok with the anti-Rhonda commentary sometimes, but what has been posted at the time was . . . racist, and I asked them to please support me in removing the ones that didn’t encourage thoughtful, respectful and civil discourse on our FB page. I never got a reply, only punished. To this day the posts are still there.”

It’s hard to believe that a station would fire someone for such a relatively innocuous response, and the station won’t comment, but Price points out that Rhonda Lee sued one former employer for discrimination. From Journal-isms:

Lee told Journal-isms, “. . . Race has been the issue with me since I started. That much is VERY true. Weather is an older white boy business and arms have been less than open for a young black girl — a polar opposite. As reported I’ve had more problems here in the south than I have anywhere else in my 25+ years in the business. Perhaps there is a pattern, but I am a glutton for punishment (ha, ha), and I want what I deserve as any professional would so if I have to fight for it I will.”

Lee had also responded to a Facebook comment from a reader who was critical of her hair (the comment got a “like” from KTBS-TV), so perhaps the Moreland exchange was the tipping point for the station. Both comments remain on the station’s Facebook page. It appears the station is more comfortable with racism than they are with a meteorologist who is (politely) not comfortable with it, just as some Americans see more of a problem with people talking about racism than with the racism itself.