Letterman Grills Jay Carney: How Did You Master Not Answering Questions? 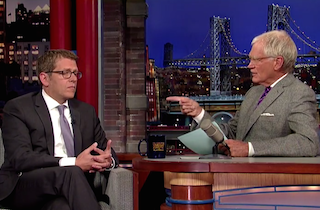 Fresh off his three and a half years as President Barack Obama’s White House press secretary, Jay Carney is making his Late Show debut tonight. In a preview of the interview released by CBS, David Letterman can be seen grilling Carney on how he was able to become so adept at not answering questions during his daily briefings.

Letterman listed off the things Carney would say to avoid giving answerers on things the White House did not want to talk about. For example: “No comment,” “I don’t have the answer,” and “I would refer you to someone else.”

“The smartest answer you can give if you don’t know the answer is, ‘I don’t know,'” Carney told Letterman. “Because the biggest mistake you can make as a press secretary is assume you know the answer when you don’t actually know.” And if you do get wrong in “today’s media environment,” Carney said “that can metastasize so quickly.”

When Letterman asked him if he could simply say, “I’m not going to tell you,” Carney implied that he would only use that line if the question coming from the press concerned a “covert operation.” While freedom of the press means that reporters “should absolutely come after public officials and demand answers,” Carney said “there is rightfully a protected area of classified information.”

Finally, Letterman read off his favorite of Carney’s many lines from his tenure: “See yesterday’s non-response.”